Growing up as children, wherever it is that you hail from in the world, we all had our favourite cartoon and family shows on television. Many cartoons and family shows are held in such high regard in the societies that we grew up in, such shows have since become culturally iconic in our respective nations. The Finns and the Swedes had Moomin, the Serbs had Laku Noc, Deco (Goodnight, Kids), the British had The Clangers, etc. We were all exposed, in one way or another, to the wholesome and innocent nature of children’s television, whether as a child ourselves or as parents, sitting in front of the television as a family. Fast forward to 2020, and, of course, it is evident that not even children’s media – much like most other forms of media in the 21st century – is safe from the ever-growing presence of LGBT and Black Lives Matter ideology and propaganda.

While both the LGBT community and BLM activists have been pushing for the furthering of their respective agendas in everyday life for years, the former has had the advantage of several more decades for it to develop its own methods for the promotion of their ideology. For well over a decade now, we have been seeing a rapid increase in the amount of LGBT content on our television screens. Such content could be as minor as a same-sex couple simply stating that they are homosexual to something as strong as a full-on graphic homosexual sex scene being depicted on-screen. While the latter continues to be limited to adult television, there are, however, instances of LGBT sex scenes depicted in films and television shows which are aimed at teenagers. One notable example is in the short-lived Doctor Who spin-off series Class, in which a Polish teenager and schoolboy (who frequently complains about having socially-conservative parents) is depicted having sex with his boyfriend – who also happens to be an alien disguised as a human.

While LGBT content in entertainment media is increasing at an alarming rate, this article will focus exclusively on one of the most disturbing examples, which is the cartoon show Steven Universe and its exploration and promotion of topics surrounding the LGBT community, as well as its highly worrying trend of intersectionality with the Black Lives Matter movement. 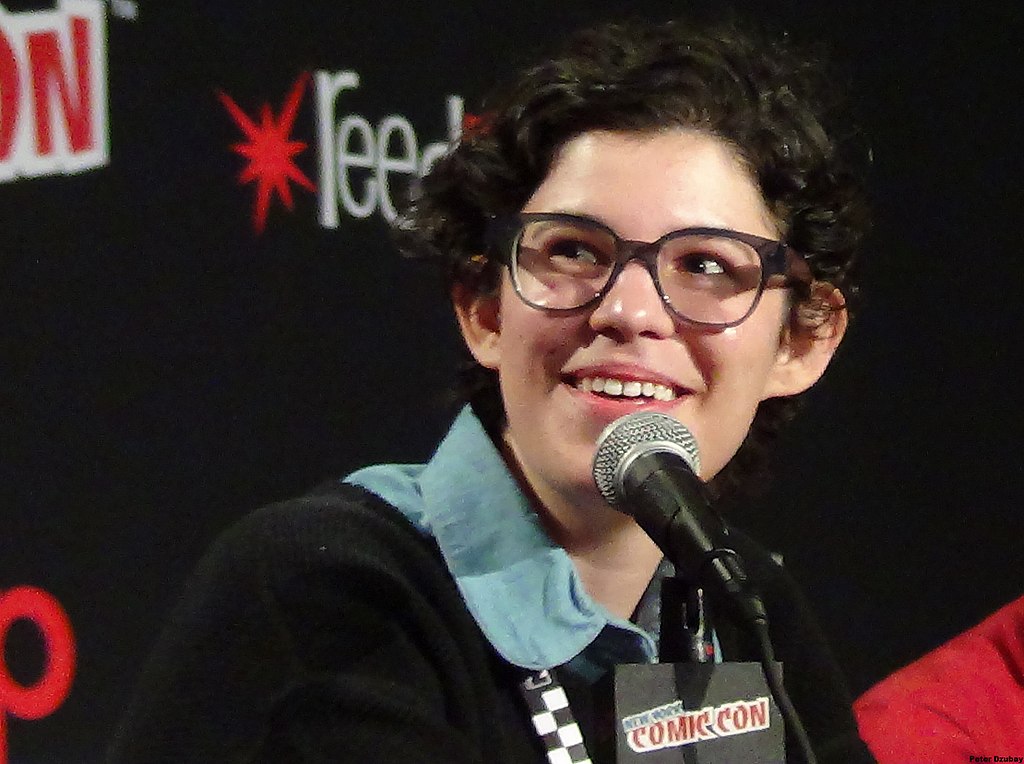 Created by Rebecca Sugar – who also worked on popular cartoon series Adventure Time – for Cartoon Network, Steven Universe is described as a coming-of-age series about the eponymous young boy, who is also half-human and half-Gem. The Gems are depicted as a humanoid race of colourful alien beings. Normally, such a premise for a cartoon would not sound any less innocent than most other cartoons of old. However, we quickly discover that Steven Universe heavily explores LGBT themes and so-called “anti-racism” from a pro-BLM perspective.

It should be noted that the creator of the show, Rebecca Sugar, is herself a member of the LGBT community – specifically a self-described “bisexual non-binary person” who uses both she/her and they/them pronouns simultaneously – and also holds the title of being the first woman ever to independently create a series of Cartoon Network. How she can define herself as a woman, non-binary and bisexual altogether at once is a mystery in itself. Sugar has stated that her own identity as a person belonging to the LGBT community has encouraged her to “stress the importance of LGBT representation in are, especially in children’s entertainment.” It is here where we turn to the most controversial aspects of Steven Universe.

In late 2020, two short clips serving as public service announcements (PSAs) from Steven Universe were uploaded onto YouTube, and they do not hold back whatsoever in their open promotion of LGBT ideology and the BLM movement. In the first video, entitled Don’t Deny it, Defy It, two young boys – one White, one Black – are playing in a playground while holding hands. The young Black boy then turns to the other boy to say, seemingly at random, and says, “Hey! When we’re older, let’s get married!” Suddenly, a third boy – who is White – slides into frame, dramatically karate chops the hands of the other two boys apart, before declaring in a sing-song voice, “Black people can’t marry White people!” Following this, a Gem character from Steven Universe appears, proclaiming, “Hey, now! Kids, don’t be racist.” The clip then reveals that the group were filming a PSA themselves about anti-racism, before the first White boy states that he does not believe that racism actually happens in the real world. The Black boy and the Gem then proceed to explain to the clearly guilt-ridden White boy that racism does exist, and that people should be actively working against it. The Gem character then tells the boys, “You kids [had] better work on this before the wedding.” While such anti-racism messages in many other contexts may not necessarily in themselves be a negative thing, the fact that the video clip bears the hashtag #blacklivesmatter is extremely telling in what the “anti-racism” message actually symbolises. After all, one of main focuses of the Black Lives Matter movement is its emphasis on being as anti-White as possible, i.e. racist. This fact completely defeats the purpose of this first Steven Universe PSA in question. The inclusion of two young boys being depicted as being in a same-sex relationship and wanting to get married only serves to add further levels of concern that social conservatives already hold towards Steven Universe.

In the second video, entitled Tell the Whole Story, a school teacher is being filmed for an educational video clip about the invention of the light bulb. Upon asking her students who they believe invented the light bulb, the students answer back in unison, “Thomas Edison!” The teacher then “corrects” the students by claiming that it was the Black American inventor Lewis H. Latimer who invented, more specifically, the filament inside the light bulb. This is factually incorrect, as the development of various earlier forms of the filament and further improvements to such can be attributed to several other inventors beforehand, who were White, such as Humphry Davy, Frederick de Moleyns, Joseph Wilson Swan, Thomas Edison and Hiram Maxim. Following the filming of the “educational” segment, the teacher then launches into a sudden rant about how “systematic racism” within the educational system does not teach children enough about the contributions of Black people to world history, but exclusively focuses on White people.

Cartoons with such blatant social justice agendas like these were all but non-existent 15 or so years ago, when the main intention of cartoons was primarily to provide entertainment for children, not to force upon them pro-LGBT and anti-White ideology. Arguably the most significant threat among all of this is the danger that is intersectionality in socio-politics – the blending of various different left-wing and liberal social justice agendas into a larger concentrated campaign of so-called progressivism. If such dangers are not countered by ideals such social conservatism, traditionalism, nationalism, etc., then even our very children will be yet another target in the long-term for the malicious and destructive ideologies that are the left and liberalism.