Gas Wars in the Mediterranean

The unexpected alliance between Turkey and Libya is a geopolitical earthquake that changes the balance of power in the eastern Mediterranean and across the Middle East. Turkey’s audacious move has enraged its rivals in the region and cleared the way for a dramatic escalation in the 9 year-long Libyan civil war. It has also forced leaders in Europe and Washington to decide how they will counter Turkey’s plan to defend the U.N-recognized Government of National Accord (GNA), and to extend its maritime borders from Europe to Africa basically creating “a water corridor through the eastern Mediterranean linking the coasts of Turkey and Libya.” Leaders in Ankara believe that the agreement “is a major coup in energy geopolitics” that helps defend Turkey’s “sovereign rights against the gatekeepers of the regional status quo.” But Turkey’s rivals strongly disagree. They see the deal as a naked power grab that undermines their ability to transport natural gas from the East Mediterranean to Europe without crossing Turkish waters. In any event, the Turkey-Libya agreement has set the stage for a broader conflict that will unavoidably involve Egypt, Israel, UAE, Saudi Arabia, Europe, Russia and the United States. All parties appear to have abandoned diplomatic channels altogether and are, instead, preparing for war. 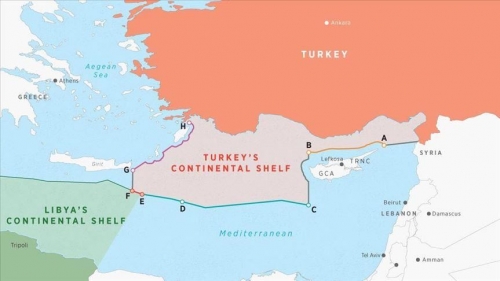 On November 27, Turkey and Libya signed a Memorandum of Understanding (MoU) that commits Turkey to providing military assistance to Libya’s Government of National Accord (GNA). The MoU also redraws Turkey’s maritime boundaries in a way that dramatically impacts the transport of gas from the East Mediterranean to Europe. Israel is particularly worried that this new deal will undermine its plans for a 1,900-kilometer EastMed pipeline connecting the Leviathan gas field, off the coast of Israel, to the EU. YNET News summarized Israel’s concerns in an ominously titled article: “Turkey’s maneuver could block Israel’s access to the sea”. Here’s an excerpt:

“Two of Israel’s wars (1956 Sinai campaign and 1967 Six-Day War) broke out over navigation rights. Israel must take note of a new reality taking hold in the Mediterranean. It must regard Turkey’s actions as a substantial strategic threat and consider what it may do to respond to it…

This EEZ (Exclusive Economic Zones) designation essentially carved up much of the energy-rich Eastern Mediterranean between Turkey and Libya, prompting a wave of international condemnations first and foremost from Greece, Egypt, and Cyprus, who may be directly or indirectly affected…..Turkey’s disregard for the economic waters of Greece, Cyprus, and Egypt.

Ankara is in effect annexing those areas pending an appeal to international tribunals, which can take many years to resolve. In practical terms, Turkey created a sea border the width of the entire Mediterranean.” (“Turkey’s maneuver could block Israel’s access to the sea”, ynet news)

The analysis from America’s premier Foreign Policy magazine was no less foreboding. Check it out:

“Turkey is meshing together two Mediterranean crises in a desperate bid to reshape the region in its own favor, with potentially nasty implications both for the ongoing civil war in Libya and future energy development in the eastern Mediterranean.

This month, Turkey’s unusual outreach to the internationally recognized government of Libya has resulted in a formal agreement for Ankara to provide military support, including arms and possibly troops, in its bid to hold off an offensive from Russian-backed rebels in the eastern part of the country. The military agreement came just weeks after Turkey and that same Government of National Accord reached an unusual agreement to essentially carve up much of the energy-rich eastern Mediterranean between them—threatening to cut out Greece and Cyprus from the coming bonanza….” (“Newly Aggressive Turkey Forges Alliance With Libya”, Foreign Policy) 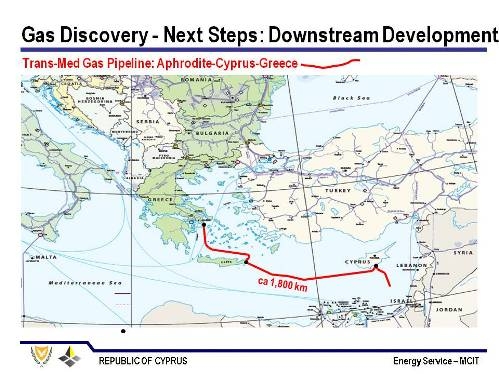 While these new developments are likely to intensify the fighting on the ground in Libya, they also portend a deepening of divisions within the region itself where new coalitions are forming and battle-lines are being drawn. On the one side is the Turkey-Libya Axis, while on the other is Greece, UAE, Saudi Arabia, Egypt, Israel, France, Germany, UK and probably the United States although the Trump administration has not yet clarified its position. In any event, the war between Libya’s internationally-recognized government and Haftar’s Libyan National Army (LNA) is just a small part of a much larger struggle over vital hydrocarbons in a strategically-located area of the Mediterranean. Here’s a clip from an article at War On The Rocks that helps to underscore the stakes involved:

“The discovery of significant deposits of natural gas in the Eastern Mediterranean beginning in 2009 was a game-changer that upended regional geopolitics. It prompted new and unexpected alliances between Israel, Greece, Cyprus, and Egypt to maximize their chances of energy self-sufficiency. The bulk of the gas lies in Egypt’s Zohr field, the Leviathan and Tamar fields in Israeli waters, and the Aphrodite near the island of Cyprus. With recoverable natural gas reserves in the region estimated at upward of 120 trillion cubic feet, the strategic implications could not be bigger. This is about the same amount as the proven gas in the whole of Iraq, the 12th largest reserve globally….(Israel’s gas field) Leviathan is estimated to hold 22 trillion cubic feet of recoverable natural gas, and a potential half a million barrels of oil.” (“Hydrocarbon Diplomacy: Turkey’s Gambit Might Yet Pay a Peace Dividend”, warontherocks.com)

Turkey’s ambitious gambit makes it more likely that its rivals will increase their support for the Libyan warlord, Haftar, who is, by-most-accounts, a CIA asset that was sent to Libya in 2014 to topple the government in Tripoli and unify the country under a US puppet. Haftar’s forces currently control more than 70% of the Libyan territory while almost 60% of the population is under the control of the GNA led by Prime Minister Fayez al-Sarraj. According to Turkish news: “More than half of Haftar’s troops are mercenaries from Russia and Sudan, who are mainly paid by the Gulf states.”

In April, 2019, Haftar launched an offensive on the government in Tripoli but was easily repelled. In recent days, however, Haftar has resumed his attacks on the city of Misrata and on the Tripoli airport in clear violation of the Berlin ceasefire agreement. He has also received shipments of weapons from the UAE despite an arms embargo that was unanimously approved two weeks ago at the same Berlin Conference. We expect that support for Haftar will continue to grow in the months ahead as Berlin, Paris and particularly Washington settle on a plan for reinforcing proxies to prosecute the ground war and for blunting Turkey’s power projection in the Mediterranean.

The Turkey-Libya agreement is a clumsy attempt to impose Turkey’s preferred maritime boundaries on the other countries bordering the Mediterranean. Naturally, Washington will not allow this unilateral assertion of power to go unchallenged.

And while Washington’s strategy has not yet been announced, that merely indicates that the foreign policy establishment was caught off-guard by Turkey’s November 27 announcement. It does not mean that Washington will accept the status quo. To the contrary, US war-planners are undoubtedly putting the finishing touches on a new strategy aimed at achieving their objectives in Libya while at the same time dealing a stinging blow to a NATO ally that has grown closer to Russia, caused endless headaches in Syria, and is now disrupting Washington’s plans for controlling vital resources in the East Mediterranean.

Washington sees Turkey’s assertive foreign policy as a sign of “defiance” which requires a iron-fisted response. But any attack on Turkey or Turkish interests will only intensify the bad blood between Ankara and Washington, it will only put more pressure on the threadbare NATO alliance, and it will only push Turkish president Erdogan further into Moscow’s corner. Indeed, the Trump team should realize that an overreaction on their part could trigger a fateful realignment that could reshape the region while hastening the emergence of a new order.